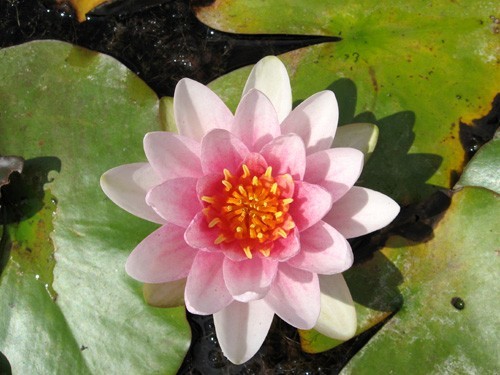 Medium-sized pink hardy water lily with pads from 12 to 15 cm in diameter, and 10 cm flowers.

Preorders from November to May

Most people think this lily was named in honour of Cunard's RMS Lusitania, which sank in 1915, a tragedy that cost 1,198 lives. In fact, Nymphaea 'Lusitania' was introduced three years before, in 1912, and was named after the old Roman word for Portugal : "Lusitania". Early on, the Portuguese referred to Brazil as Nova Lusitânia.

The lily resembles 'Fabiola' and 'Mrs. Richmond', but it is lighter than the former and darker than the latter. It is easy to grow, vigorous, and blooms well all season.

Plant one per 20 litre planting container at a depth of 40 to 100 cm in order to have approximately one square metre of surface coverage after a year or two.